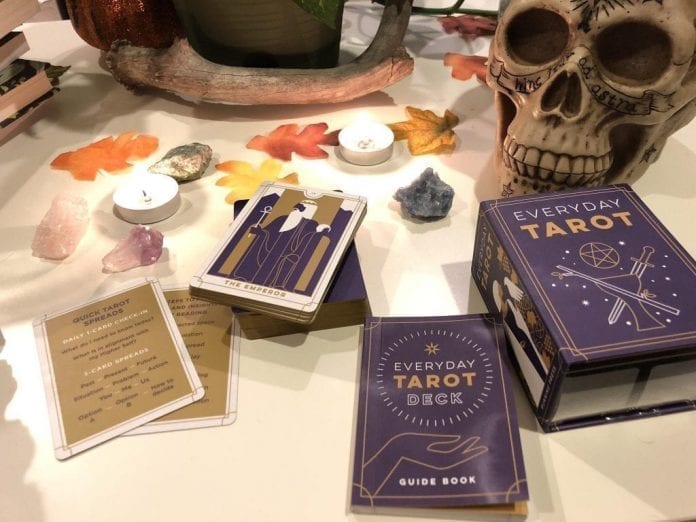 People used to think that tarot and science were completely opposite schools of belief. That’s all changing now, however, with the Science Tarot deck, which uses the Hero’s Journey archetype masterminded by Joseph Campbell to finally infuse logic and nature with mythology and mysticism. The journey this deck takes you on is a highly personal and unique journey by reading certain myths through a scientific lens.

Major Arcana cards are combined with information on a particular discovery in the science world that has contributed towards our current understanding of the universe. The findings of Mendel’s Peas experiments, in particular, are combined with the Empress in order to make a greater connection to our understanding of animals, plants, and humans. This especially covers things such as personal growth and other hereditary traits.

The Power of Fire

Cosmology, astrology, and astronomy are reflected through the Bunsen burner cards that, naturally, are combined with fire. This particularly represents our connectivity to our worldly beginnings that urges us to create. The life of a star, furthermore, is represented by the Seven of Wands, which reminds us how stars develop over thousands of years in ways we could never hope to recognize. It thus reminds us of the parallels with our own lives, and how we ought to grow as people until we are a completely different entity altogether.

The Nine of Pentacles—represented here by a magnifying glass—is represented by a flash of amazing light as a reflection of the magnetic field of the earth and light particles of the stars. Combining chemistry and geology in a way that gives us a closer look at the world’s various elements, the pentacles of Science Tarot shed insight into the production of beauty from the unification of small and large things.

Scalpels and swords, which are of course semantically similar, are represented in unison in Science Tarot. Shining a light on math and physics, this combination urges you to interpret the connections you make along the journey of your life. The Two of Swords contains the imagery of apples on pulleys, which makes us think of gravity and of how uncontrollable it is as a force. Although its uncontrollable elements might instill us with fear, we have the choice of whether to resist it to prevent damage to ourselves (i.e., the apple hitting us) or whether we allow the force to control us altogether.

The Notion of Return

Scientific beakers appear on the cups suit cards which allows us to realize that we have to come back down to earth in order to thrive. Within the emotional realm, we can come more into contact with our own relationships. In times of emotional transformation, we can thus rely on the Eight of Cups, represented in Science Tarot by the Cocoon.

With Science Tarot, we can truly see how the worlds of science and mysticism are becoming thought of as not mutually exclusive schools of thought, but rather as a whole that can help us to understand our own journeys in life a little bit better.

What is An Oracle Reading?

Tarot Cards to Help You Write